Not long ago, I recruited a team of NASA computer engineers to help me build a powerful AI system that can identify highly profitable surges in earnings stocks.

Brutus has been a godsend - spitting out winning trades all year ...including 6 out of 7 winners this month alone.

But it's never uncovered an opportunity as big as the one it’s showing me right now.

You see, normally the signals for top trades are spread over numerous sectors.

Yet my most recent signal batch revealed a HUGE anomaly...

I’m talking about not one... not two... not three... but FOUR potential triple digit winners – all based on late summer earnings in the... semi-conductor sector. Yes, silicon chips. Why?

Turns out this law is flooding the U.S. semi-conductor industry with cash. $283 billion to be exact.

Now, obviously it’s too early for that money to be included in a company’s balance sheet for third quarter earnings.

Instead, my system has made a remarkable discovery.

It’s pinpointed almost to a T what stocks it believes the “smart money” -- I’m talking about the big Wall Street firms – are betting on (or against) to ultimately benefit from the $283 billion windfall ...

I’m talking about a very clear early warning signal that specific tech stocks are going to surge up or down in a big way.

When I saw the numbers, I got so excited. I knew I had to alert you right away.

While most folks are whistling away the last days of summer on vacation, this is your chance to capture some major rapid-fire profits.

Make no mistake: the big players on Wall Street are not laying low at the beach. They’re on the phone wheeling and dealing, pushing big noney wherever they think they can make a mint right now before third quarter bonuses are calculated. Their millions of dollars at stake. And they know this new CHIPS bill gives them an opportunity to set up big bets on the biggest winners – and losers in this new $280 billion tech race.

All that action is creating massive volatility in specific stocks – and my Brutus system has identified exactly where the action is targeted – and where the biggest price surges will be.

Listen, you can’t get this kind of intelligence from the Wall Street Journal or Bloomberg.

In fact, Brutus is the only system I know of in the world designed to specifically find these “shadow surges.”

Mark my words, anyone who joins me will have the chance to make the biggest windfalls of their life...

All before Labor day!

Here’s how it’s going to work. Beginning on Tuesday August 30, I’m going to hand deliver on a silver platter detailed trades designed to play these surges for potential triple-digit gains.

I’m going to tell you:

It’s going to be a shot at the biggest, fastest gains of the year. I’m talking about cashing out with a potential 250% or more within 11 days.

How can I be so sure?

Because BRUTUS thrives on finding HUGE SURGES based on earnings volatility. These surges can lead to massive gains no matter if the markets are trading up, down or sideways.

Take, for example, what happened April 21.

I sent out an urgent briefing to lock in a 250% gain on PayPal, thanks to a volatility surge BRUTUS had identified two weeks prior.

And my readers couldn’t wait to share how they did…

Then there’s Val, from Phoenix, AZ, who recently posted in our 24/7 online trader’s network about a 27% gain:

Is Brutus perfect? Of course not. Some trades only break even, and some might lose money.

But it’s been hands down the single-best way to make money in this market right now.

In fact…while investors have lost a fortune in 2022... my tight-knit trading family has had a chance to make a fortune with 46 triple and digit winners this year!

But we’re not done yet – not even close…

Because these upcoming Shadow Surges have a chance to be faster and bigger than anything we’ve seen all year...

And the first surge is coming .

This is why – for the first time ever…

Up to today, it would have cost you at least $2,200 for a year’s subscription to my Operation Surge Strike service.

But to make sure NOBODY misses this opportunity – I’m going to let you secure membership for only $149.

It’s the lowest price I’ve ever offered. I simply refuse to let price get in the way of you missing the opportunity to profit on all 4 Shadow Surges

Let me be clear: Just $149 gets you access to everything you need to make big profits from this unique situation.

That’s all it costs to get in on all 4 Shadow Surges... that could generate 100X the cost of the subscription.

So time is of the essence.

To get your share of this epic windfall, it’s critical you act now.

As soon as you secure your subscription below, I’ll email you a detailed, step-by-step OPERATION SURGE STRIKE ALERT BRIEFING, designed to take you by the hand show you how to make these moves with the biggest potential profit.

The Alert will tell you:

You’ll even get detailed, easy-to-follow trading instructions including the Entry Date, Exit Date, and Projected Gain.

All you’ll have to do is follow my instructions.

And this Shadow Surge opportunity is only the beginning.

Once you become a member of Operation Surge Strike you will get BRAND NEW surge opportunities to make double and triple digit gains – ALL YEAR LONG. In fact... 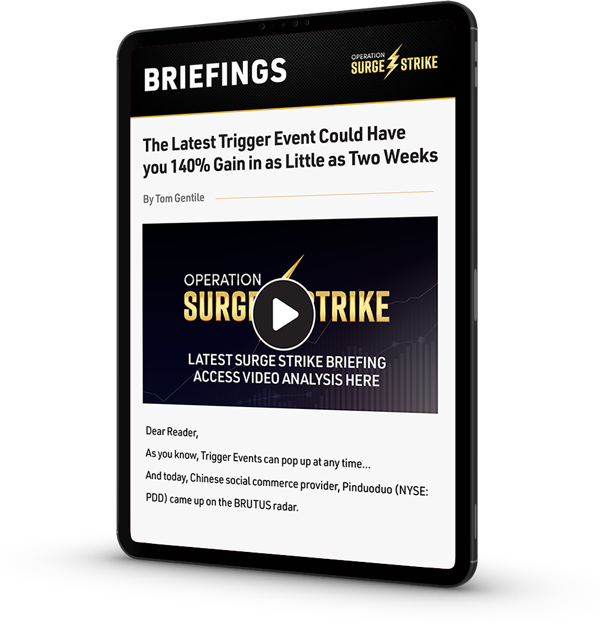 You’ve seen how fast the action can be.

These briefings contain everything you need to know about how to trade each surge identified by Brutus, my proprietary system, including:

Detailed instructions on your Entry Date, Exit Date and Projected Gain. With all this knowledge in hand, you will know exactly how to take advantage of the potential behind each Surge Strike for maximum potential upside.

Now, in an average week I’ll send you two new Surge Strike trades. That’s more than 25 recommendations in the next three months.

But as I explained earlier, we’re not in average times – anything but...

I also want to make sure you hit the ground running. So as soon as you secure your $149 membership to Operation Surge Strike you’ll receive my full library of video tools that will help you trade like a pro. 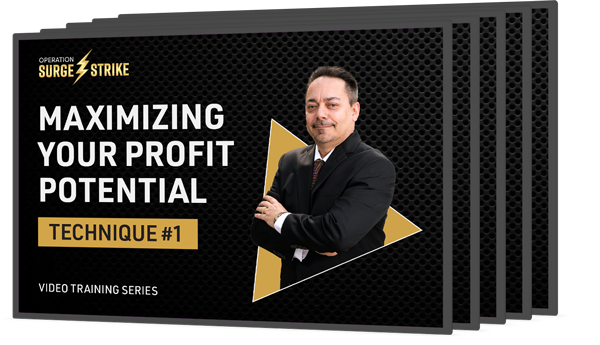 In this series, I’ll show you the five tactics you need to know in order to carry out these quick, deliberate strikes for maximum profit potential.

These are short videos that you can watch in about 20 minutes.

Personally, I recommend watching them back to back during your first week as an Operation Surge Strike member. This will kick your “trading brain” into overdrive – and get you ready for the next surge event on .

Now, I have to mention – this video series is for members only and is not for sale under any circumstances.

And once you’ve initiated your first Surge Strike, there are a few additional steps I want you to take in order to amplify your Operation Surge Strike experience to a higher level. 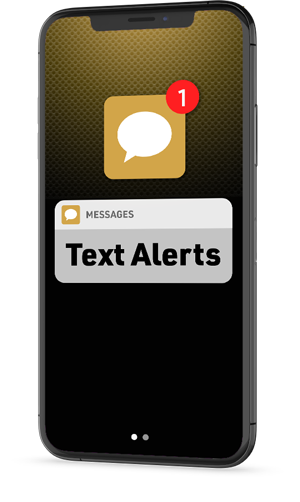 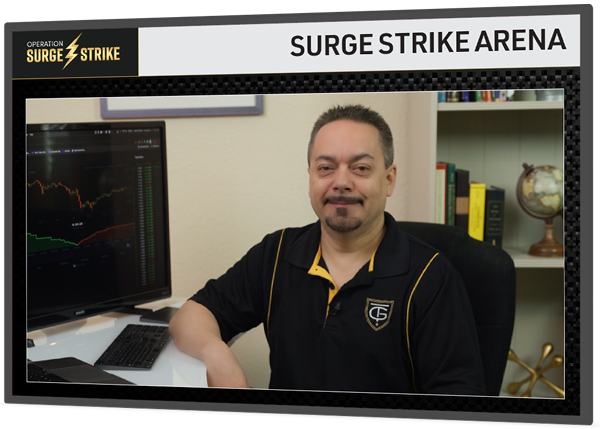 That’s why I’ve created the Surge Strike Arena where my team and I will go live weekly for a full debrief on new trades, open positions, and upcoming surges that my proprietary software, BRUTUS, has isolated.

You’re going to see at least 25 Surge Strike plays over the next three months, each with the potential to deliver big, fast wins.

But time is of the essence. 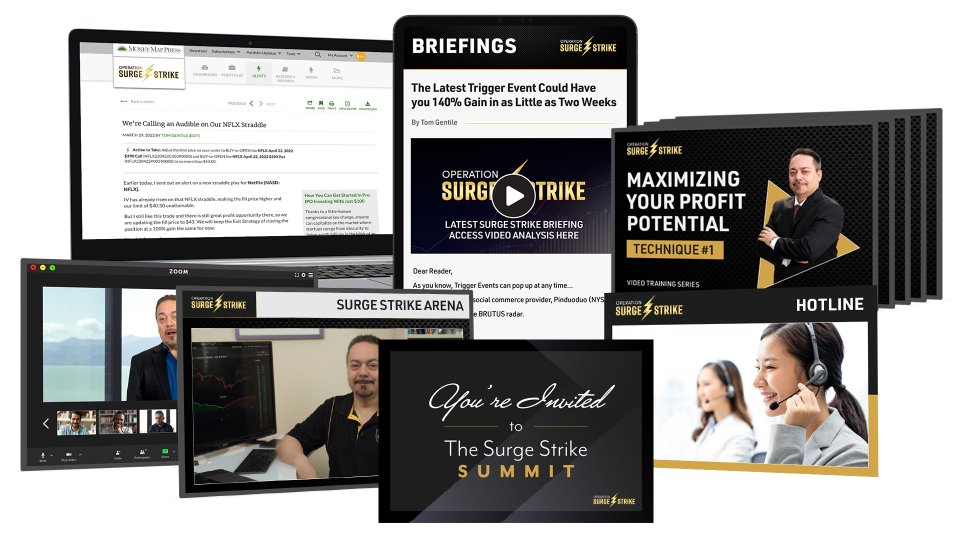 You’ll get over 25 recommendations in the next three months.

This series will get you off to a fast start trading these incredible surges.

We’ll have weekly live trading sessions to analyze our positions and break down strategies.

Interact with other Surge Strike members, share stories, and celebrate your wins in a 24/7 chat room.

And the moment you say “YES,” you’ll have immediate access to all of the above so you can prepare for the profit opportunities to come in the next twelve months.

I can’t keep this offer open for long.

fields with (*) are mandatory