Get Up To 5 Chances To Double Your Money Every Week - All Year Long
Same ticker, at the same time of day, with the same trade, and you can get in for $200 or less.

Your Next Potential Daily Double is on Deck in:

Thank you so much for joining me for today's event.

You just saw the power of this strategy first-hand…

And by now, you understand exactly how it could change your life forever – starting as soon as 2pm.

That’s when I’m going to release my next Expiration Trader recommendation. And if you join me now–it will be your first your shot to see these kind of results:

So many trading “experts” love to TELL you how great their strategy is.

But I put my money where my mouth is.

Expiration Trader works, and it's effective in today's volatile market.

I know this from my own success, and real trades that got REAL results. Not just for my hedge fund clients–but for my inner-circle readers–everyday Americans from every walk of life.

Over my twenty years as a professional trader, all the way from the Chicago Board Options Exchange to running my own hedge fund…

But NOTHING comes close to the results I’m seeing from these daily expiration trades.

No matter if it’s my reader’s money, my family’s money, or my OWN money… there’s only one strategy I’m using right now…

And this is it.

A 7X account explosion while the market dropped over 6%.

If that doesn’t show you the potential of this strategy, I’m not sure what will.

And I’m about to release my next trade.

That means you have until your chance to double your money or more, so I wouldn’t twiddle your thumbs.

These “Daily Doubles” are trades on the same stock, at the same time of day, with the same type of trade.

And you can get into each one for around $140 bucks on average.

Check out some of our recent success with these consistent Daily Doubles… All in UNDER two hours:

Just four simple steps stand between you and aiming for a direct cash deposit of your profits at market close if the trade works out.

And the best part is… our trade setup allows us to execute Steps 2-4 automatically.

You take three minutes to set up Step 1, and you’re done.

As long as you set up the trade correctly, Steps 2, 3, and 4 will trigger on their own. You don’t have to press sell, don’t have to do maintenance on the position, nothing!

And I’m going to execute every step, alongside you, LIVE!

Check out this recent trade on how it works.

For just $136 you could have entered this trade.

We took our first profit on half our position at 157%…

Between our three automatic exits on the trade, our weighted return was 311%. 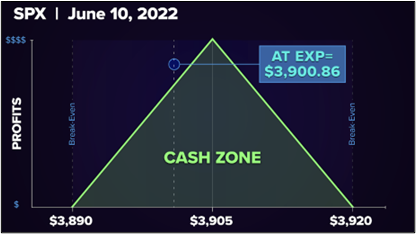 Not bad for three minutes of “work” to set up the trade.

How about this one. 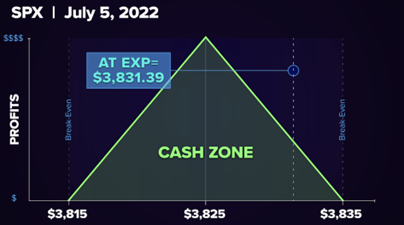 Again, not bad for three minutes of “work.” 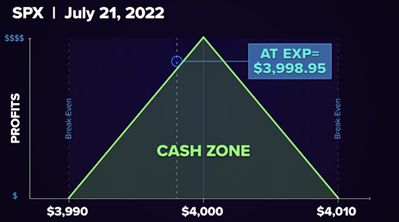 Here are some of the weighted gains (per contract) on our recent Daily Doubles:

…All in LESS THAN TWO HOURS with the SAME trade on the SAME stock around the SAME time.

Do these trades ALWAYS win?

Absolutely not. I wouldn’t be here teaching you this if that was true, I’d be in Tahiti sipping a pina colada.

What I can tell you is this.

As of the Expiration Trader launch debut, I have sent 66 total Daily Double Trade Alerts.

Of those 66 alerts, 41 were winners and an astonishing 21 triple-digit winners.

I still have dozens of contacts on the trading floors…

And I don’t know of ANYONE else out there using this strategy.

Not on Wall Street…

Not on the CBOE.

If they are–they’re keeping quiet about it–and I can’t blame them!

I mean, just look at the results my students have seen.

Joe would have never “dared” do a butterfly a few months ago. 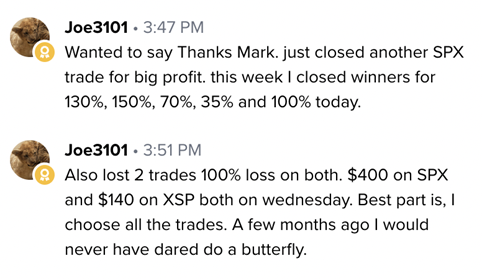 Dave hit winners on both the SPX and the XSP… in the same day!

I could go on for pages…

But what you need to understand is that …

These Expiration Trades are cheap… consistent … and FAST.

With an average cost of $137 per trade, this strategy can work for just about anyone.

And remember, there’s ANOTHER way to trade this strategy that lets you get in for 3X LESS per trade on average…

And get a shot to make even BIGGER gains.

That’s what Vicki G. did…

In 2021, Vicki G. was just hoping to make enough trading to help pay her bills.

Today – just one year later – Vicki has quit her job to trade full-time.

In fact, using this exact strategy… Vicki made 966% in just 90 minutes!

And she did it with a dirt-cheap trade anyone could have gotten into for just $15.

Now, these trades don’t happen AS often… “only” 3Xs per week - but when they do, you’ll get a shot at them, too.

That’s roughly 416 CHANCES to DOUBLE YOUR MONEY in the next 365 days.

But it could be even more.

Do we win every time? Of course not.

But when we do win, these results can be life changing…

And it all kicks off at 2pm SHARP.

As a member of this elite research service, you can be there LIVE.

And we don’t need long.

Because we do one trade at the same time every single day.

(Reminder: next trade alert hits in ...)

And it takes 3 minutes to set up.

After that–you’re DONE. Because these trades close AUTOMATICALLY.

Which means that, if we win, your profits will be deposited by 4:30pm that same day…

Up to 8 Trade Alerts Per Week 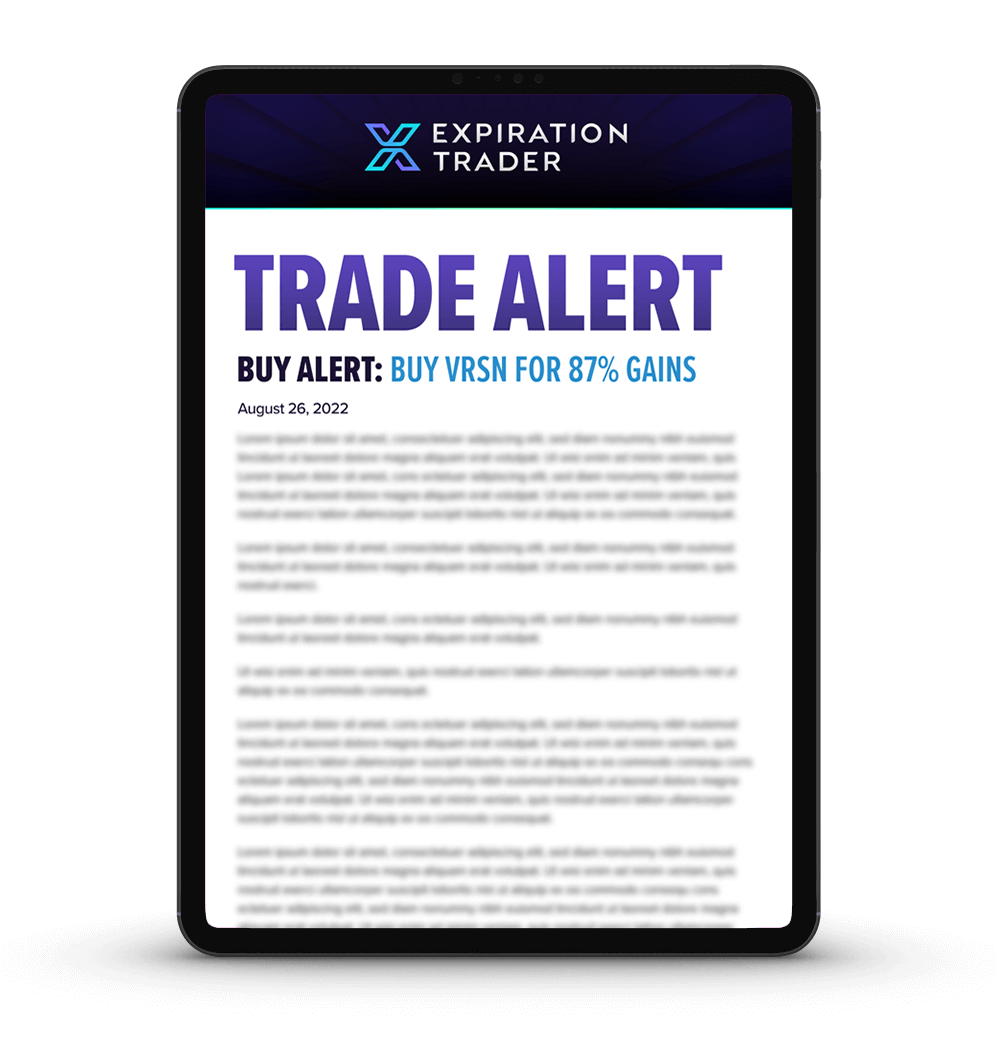 With SPX and XSP expiration daily, I’ll hit you with my analysis of the daily market and we’ll have the opportunity to hit up to 10 Daily Doubles each week.

Over the course of the year, you could have access to up to 504 Daily Doubles if you made both trades.

Every time we issue a trade alert, it’ll be sent directly to you via email and text.

Everything you’d need to know in order to set up this trade from start to finish. And if that’s not enough… I’m also going to show you how to set these up LIVE… WITH ME… DAILY… 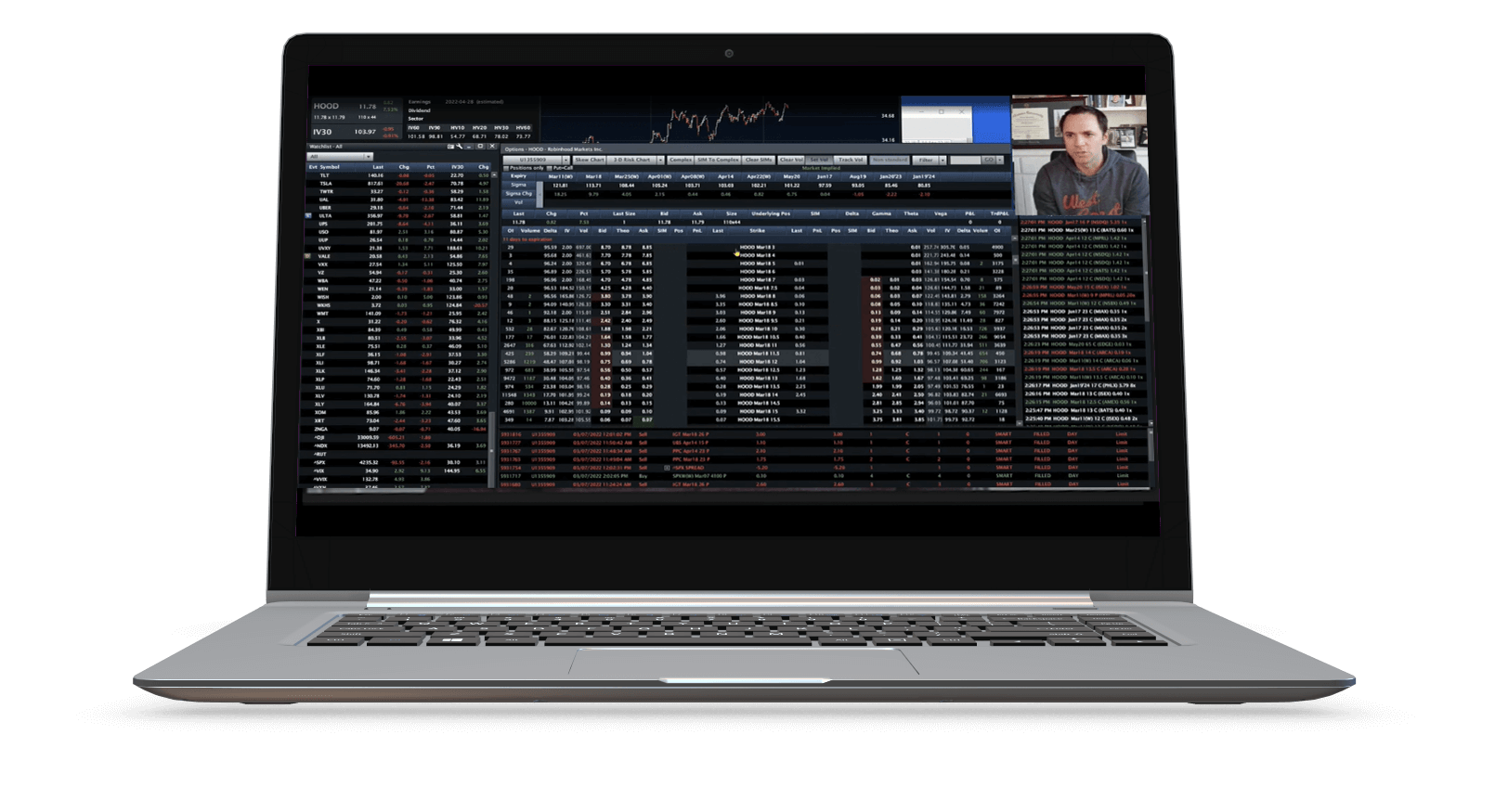 Every day the market is open, I’ll pop into the Members Only Expiration Trader Chatroom.

Now, this chatroom is open 24/7, but each day at 2pm we’ll put on our Expiration Trade together via live video stream

I’ll walk you through the strikes, how to make sure we get filled on the ENTIRE trade from the start, and you’ll actually WATCH ME do it in real time via my screenshare.

Any general questions you have, my expert moderators will be on hand to answer and help you through the process.

There is NO REASON you can’t learn to do this…

We’re going to do it together! 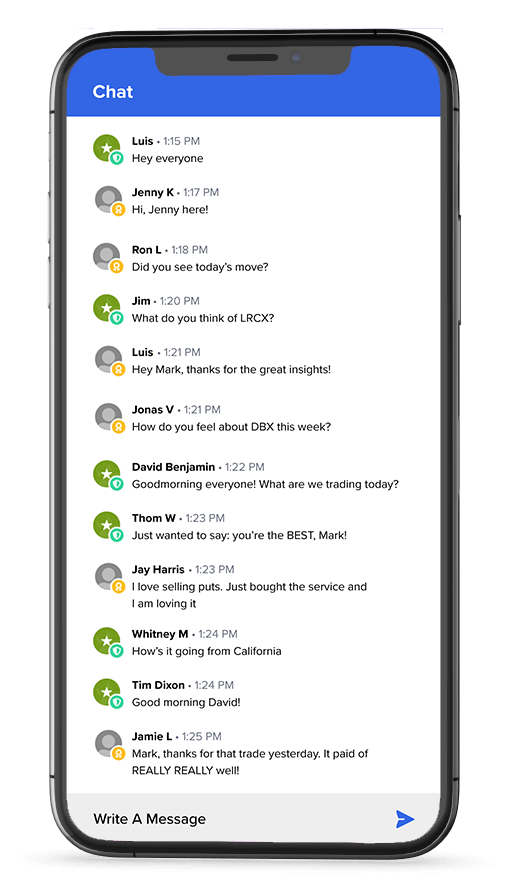 Your Members Only Chatroom also gives you access to a like-minded community of options traders.

NO MATTER your experience level - if you’re a beginner or a seasoned pro - there is always something to be learned from this community.

Something goes south in the market and you’re not sure how it affects your trading? JOIN THE CLUB! You will have fellow Expiration Traders in the same boat, and now you have a common place to discuss your battle plans for the markets. 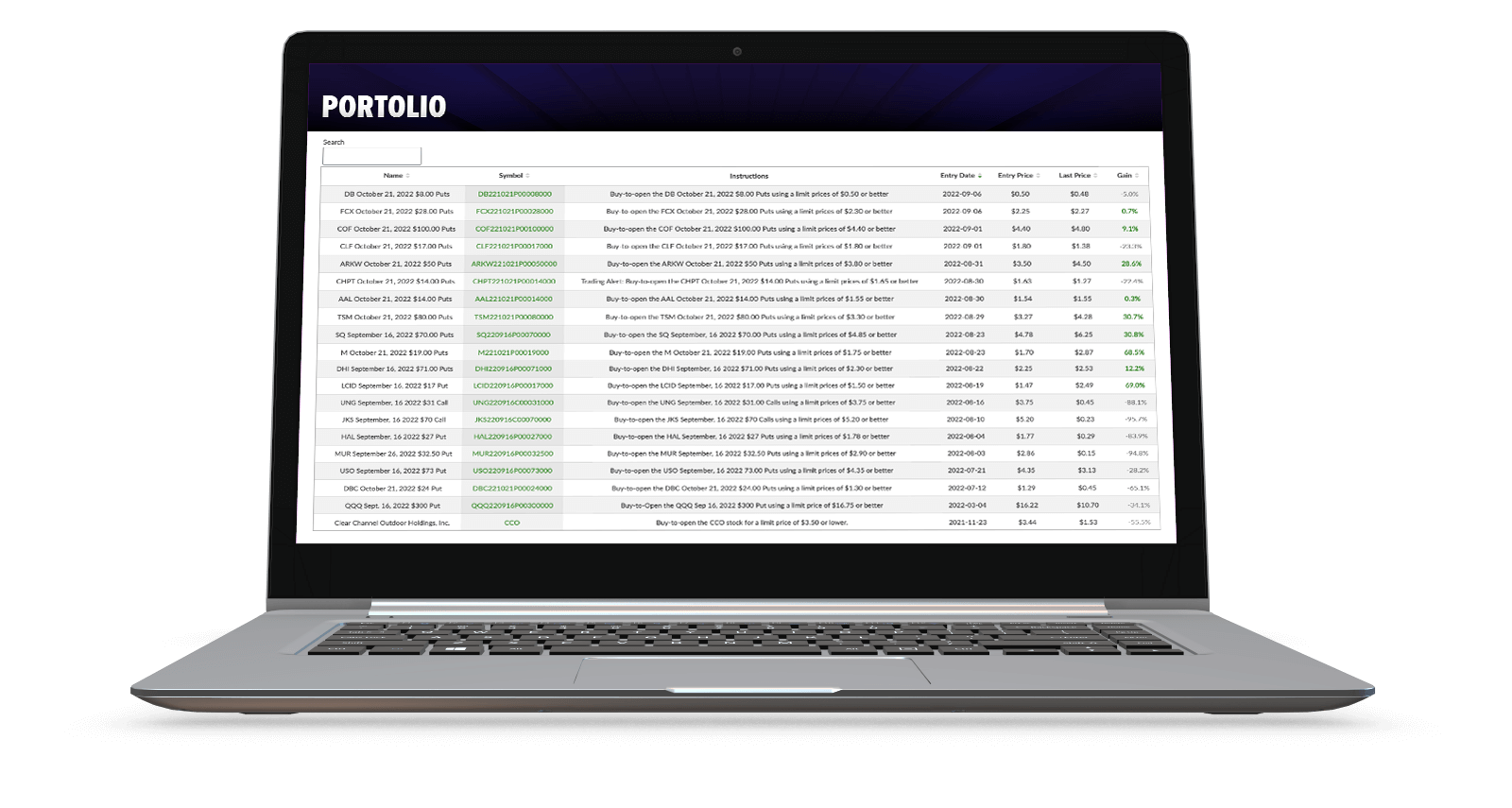 Your member platform also contains a picture of our Live Expiration Trader Portfolio.

You’ll be able to see all closed positions (COMING SOON!) and all existing, open positions, so you can keep track of your progress.

Can’t make a daily 2pm session? No problem - check back in the portfolio and you’ll see the Trade Alert you missed. 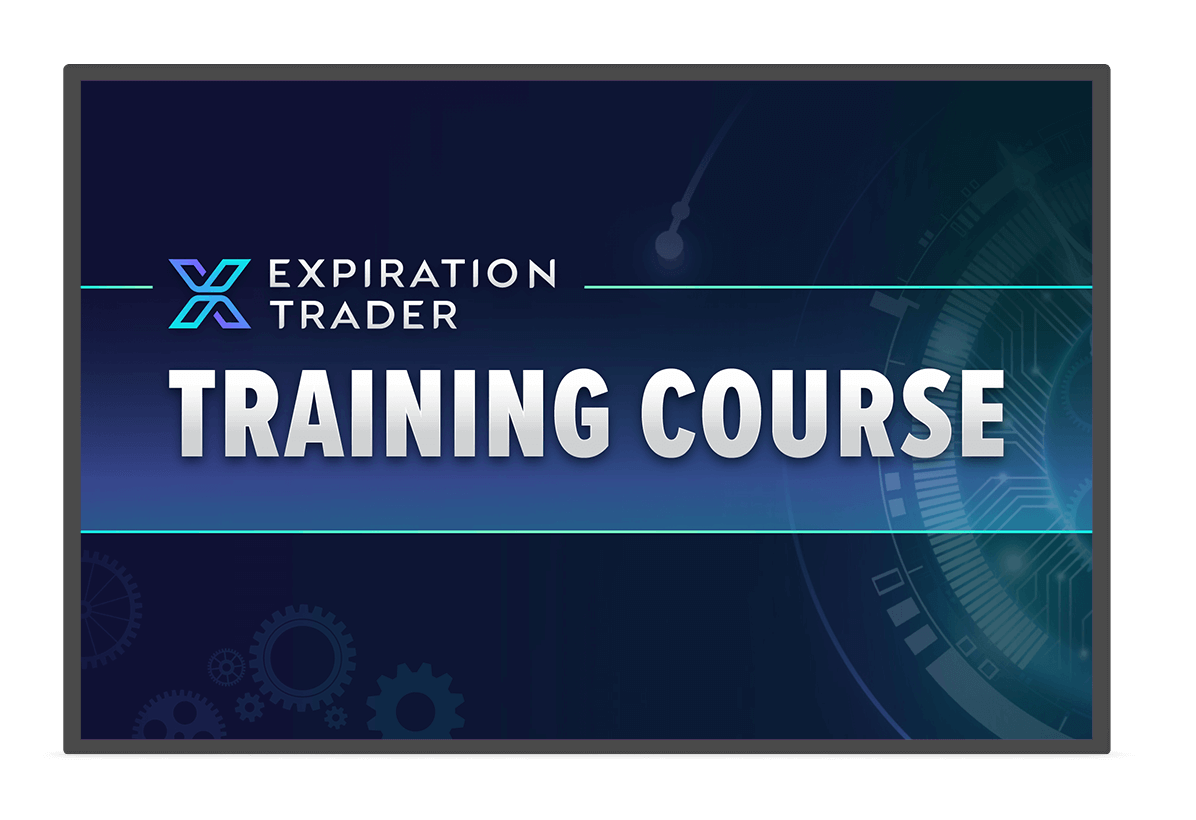 The Expiration Trader Training Course contains 3 critical pieces of options education to get you up and running immediately.

You have the Foundations of Options Video Course, where you’ll learn the more advanced buying and selling strategies of options. This course will have video lessons, quizzes, and is something you can keep directly on hand, so you can return and review the material at any time.

With all three of these together, you’ll be ready to go in no time.

Try the alerts, review the education, and complete your Training Course, and if after 30 days you’re not satisfied with the trades, the education, or the service in general, just give my VIP team a call at 855-509-6600 and they’ll refund 100% of your payment.

No hassle, no strings attached.

This is how confident I am in this strategy.

This is how much I KNOW this has changed options trading forever for my subscribers, and it has the power to do the same for you…

And if that wasn’t enough… I’m doing something that could get me in trouble.

You can access ALL the Founding Member Premiums listed above for the next TWO YEARS for just $2950.

That comes out to less than $3 PER ALERT… All on trades that could Double Your Money or more.

I know which one I’d pick…

In fact, it’s a no brainer.

I can’t wait to get started! JOIN ME RIGHT NOW! There’s no time to waste…

In … I will release our next Expiration Trade LIVE with Founding Members.

I better see you there.